skip to main | skip to sidebar

>Around 530AM Navy Chief Vice Admiral Ferdinand Golez directed all available floating and air assets in the area to be deployed. Two Multi-Purpose Attack Crafts (BA 482 & BA483) dispatched to SAR operations area; at break of sunlight, Navy Islander aircraft took off from NavForWeM Headquarters to the SAR area; 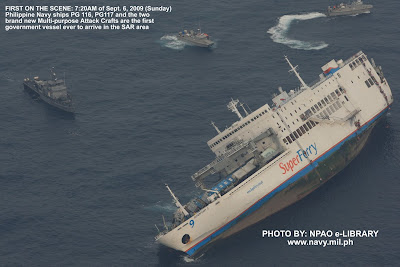 >As of 720 AM the FIRST GOVERNMENT vessel ever to arrive in the SAR area in Siocon Bay, ZDN is Navy Patrol Gunboat 116, followed by Navy PG 117 at around 745AM. Immediately, the personnel of the vessels began retrieval of passengers of the ill-fated ferry.

>As of 820AM, around 115 passengers were already rescued by the four Navy Vessels. Naval ad hoc task group Superferry 9 headed by on-scene officer CDR Sabarre was formed to integrate navy rescue efforts and coordinate efforts of other rescue agencies arriving in the area. He reported that most rescued passengers were “very weak and needing urgent medical attention”. Drinking water is also a scarce.

>As of 1120AM, Two Rigid Hull Inflatable Boats with one team each of Phil Navy SEALs were dispatched to augment the rescue and retrieval teams already in the area; RAdm Pama, MGen Ben Dolorfino, CG, Westmincom flew to the SAR area to personally assess the situation.

>As of 2PM, the Navy Contingent alone (emphasis supplied so as to avoid confusion as to the figures) has rescued 442 passengers while 4 dead bodies were retrieved. From the number, the earlier passengers rescued or recovered were brought by MV Meriad to Zamboanga City as of 130PM;

>Navy Chief Vice Admiral Ferdinand Golez condoles w/ the families of those that succumbed in this latest sea tragedy even as rescue and retrieval operations by the Navy and other government agencies are still ongoing. "The Phil Navy remains steadfast in its commitment to serve our countrymen especially in times of crisis by being there when needed the most," he said in a statement.
Posted by Buddy Sambalilo at 2:50 PM

Catch us in web